Haapsalu, the home of Haapsalu scarf, is a small town in north-western Estonia that is known for its curative mud and elegant lace scarves and shawls. The women of Haapsalu knitted square scarves to keep warm in winter. In the 19th century mud bath establishments brought wealthy Russians to this health resort and the women found that they had buyers for their handcraft. In time scarves evolved from simple patterns and few colours (black, natural white, gray) to the delicate lacy scarves that many noble ladies desired. The new railway line brought with itself many new vacationers and the steamers visiting Haapsalu harbour spread the word about the scarves (and the scarves themselves) to other countries beyond Russia.

When Estonia became independent in 1918 the number of european vacationers rose and the scarves became known in Scandinavia, continental Europe, England and even in Canada. The scarf became a valuable gift and souvenir and a special pattern “Crown Prince Pattern” was made for the scarf that was given to the Crown Prince of Sweden in 1932, later King of Sweden, Gustav Adolf.
The Second World War stopped the lace knitting in Haapsalu, the knitting started again in 1950s, but not following the traditions (for example center pieces were made on knitting machines). In 1966 a group of knitters was employed by the craft cooperative UKU who started to make the scarves in a traditional way. The regaining of independence in 1991 brought with itself many changes and UKU was closed. From there on knitters have designed and sold their own work. In Haapsalu there is a Haapsalu Handicraft Society that organizes the Days of the Haapsalu Shawl (the rectangular Haapsalu shawl is more popular now). A beautiful overview of the Haapsalu Shawl Day 2011 is in the tettidesign blog

The traditional scarf is knitted from natural white two-ply wool yarn (16/2 – 28/2, 800 m or 875 yds – 1400 m or 1530 yds in 100g).
The scarf is knitted with short wood needles or circular bamboo needles. The center is knitted with 3-3,5 (US 2 1/2 – 4) needles, the lace edge is knitted with needles one size larger. To cast on even bigger needles are used.
The patterns were originally passed around on long and narrow knitted samples. Patterns with graphed symbols started to be used in 1930s. The patterns use many yarn overs and nupps (bobbles). The nupps besides making the scarf heavier are also a proof that the scarf was hand knitted as they can’t be knitted on a knitting machine.

Nupps knitted by me, from the scarf seen below.

The scarf is a square with the length of approximately 100-150 cm (40-60 in.) or 200-260 stitches and it consists of two parts. The main part consists of a fine-patterned openwork section surrounded by a narrow band of pattern separating it from a border pattern that is surrounded by a garter-stitch border. A lace edge is knitted separately and sewn to the main part. 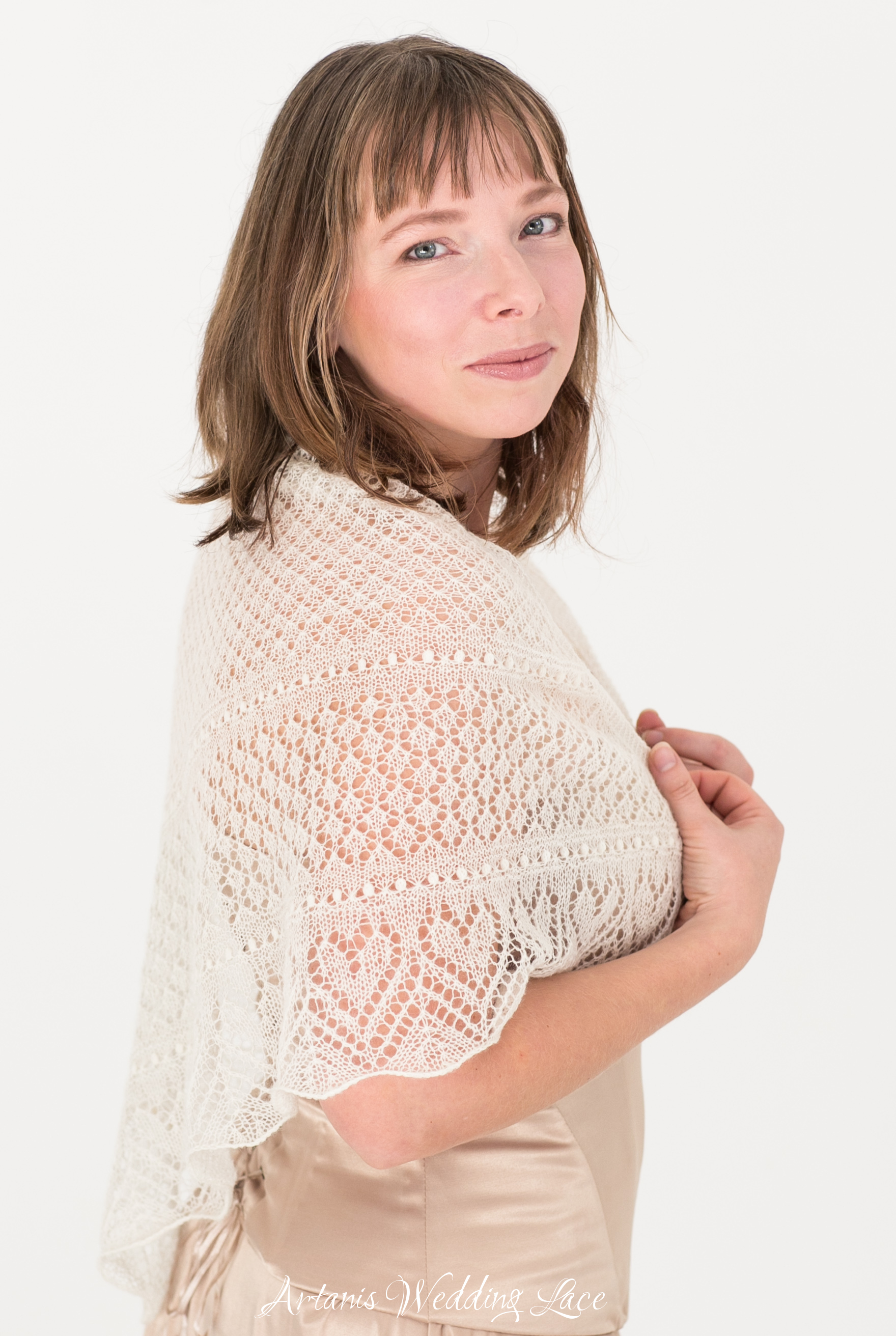 A triangular Haapsalu Scarf started from the lace edges of two sides.

The finished scarves are hand washed with mild soap in warm water. The water is squeezed out gently and the scarf is blocked either on a special blocking frame or with pins so that the scallops become nice and the pattern starts to show its real beauty.

If you want to know more about the history of the Haapsalu scarf and explicit instructions on how to knit one, then I would suggest you read the book “The Haapsalu Scarf” by Siiri Reimann and Aime Edasi (check the availability) , that is also where I learned a lot about Haapsalu scarves.

There is a good book on Haapsalu shawls also by Siiri Reiman and Aime Edasi called The Haapsalu Shawl This book is a very good introduction to Haapsalu shawls giving their history and clear instructions on how to knit them. It also contains more than 100 patterns.

One of the promoters of Estonian lace knitting is Nancy Bush from America and she has written a book “Knitted Lace of Estonia” that has a DVD included where Nancy Bush explains all the techniques of knitting a Haapsalu scarf/shawl.

ByRees – Lace and jewelry made with LOVE. She blogs mostly in Estonian but occasionally also in English. She has knitted a lot of Haapsalu shawls and scarves and several wedding dresses. Also you can order good yarn for lace knitting from her!